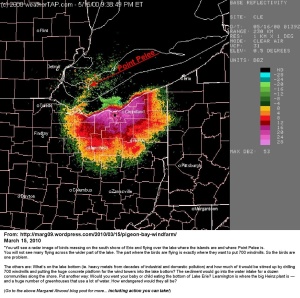 This is  a radar image of birds massing on the south shore of Erie and flying over the lake where the islands are and where Point Pelee is. You will not see many flying across the wider part of the lake. The part where the birds are flying is exactly where they want to put 700 windmills. So the birds are one problem.

The others are: What’s on the lake bottom (ie. heavy metals from decades of industrial and domestic pollution) and how much of it would be stirred up by drilling 700 windmills and putting the huge concrete platform for the wind towers into the lake bottom? The sediment would go into the water intake for a dozen communities along the shore. Put another way: Would you want your baby or child eating the bottom of Lake Erie? Leamington is where the big Heinz plant is — and a huge number of greenhouses that use a lot of water.How endangered would they all be?

And: The process itself is deeply suspect. Residents and municipalities have been excluded. This project was cancelled four years ago but the Minister responsible has been dumped. The Ontario Government seems dedicated to ramming this project through at any cost. Why?  Especially since windmills in water have a lower efficiency, and windmills in general are much less efficient than supposed — no way to store the energy.

Every community and township council along the shore are opposed to this. As are the federal and provincial members of parliament from all parties in this area. People fought for centuries to obtain “democracy” — a say in one’s own affairs. The process of jamming through this windfarm has been highly anti-democratic. Who benefits?